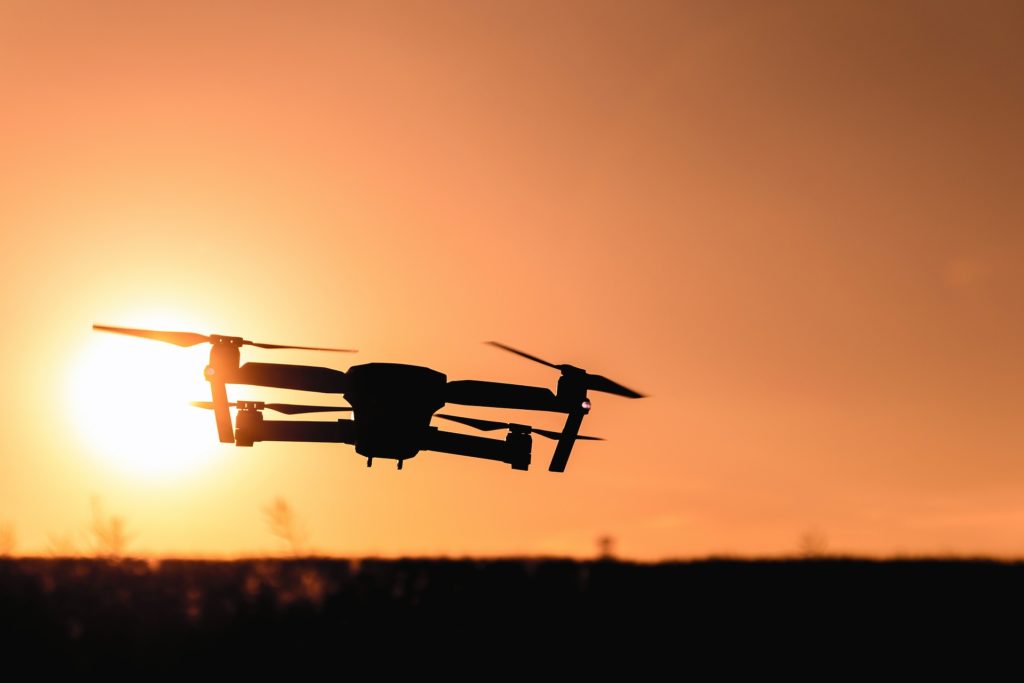 An overview of Australia’s drone laws

Are you just looking to fly your drone for fun? If so, the good news is no certification or training is required for people wanting to operate drones for recreational purposes. However, there are a number of drone laws to consider to ensure the safety of airspace users and people around you. Overall, Australia’s drone laws include no flying:

Whether you agree or not with the legislation, drones (not matter the size or use) are considered as “aircraft” as per Australia’s Civil Aviation Act. The Act defines aircraft as “any machine or craft that can derive support in the atmosphere from the reactions of the air, other than the reactions of the air against the earth’s surface”. Thus, all drones are governed by the regulations set out by CASA (the Civil Aviation Safety Authority). Most of the legislation that affects drones is provided in Civil Aviation Safety Regulation (CASR) Part 101. The major rules are:

1. Don’t create a hazard to others

The legislation explains “a person must not operate an unmanned aircraft in a way that creates a hazard to another aircraft, or another person, or property”. Even if your flying is not going to break any of the following rules, you must still ensure you don’t create a hazard.

2. No flying within 3nm (5.5km) of a controlled aerodrome

This relates to an aerodrome where the control tower is “active” (currently being used). A person must not operate an unmanned aircraft within 3nm (5.5km) of the movement area of a controlled aerodrome.

This rule does not apply to micro RPA (100 grams or less) or RPA being flown by a certified operator.

3. Be cautious when flying within 3nm (5.5km) of a non-controlled aerodrome (or helipad)

4. Don’t fly in an approach or departure path

CASA has provided guidance for how to avoid approach an departure paths at non-controlled aerodromes and helicopter sites. The following diagrams are from CASA’s advisory circulars. 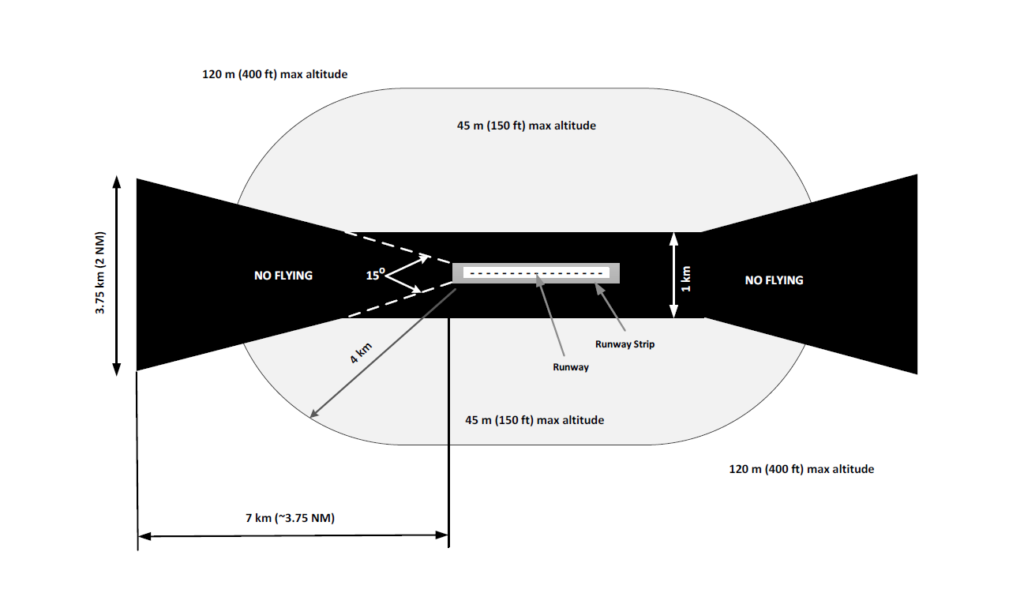 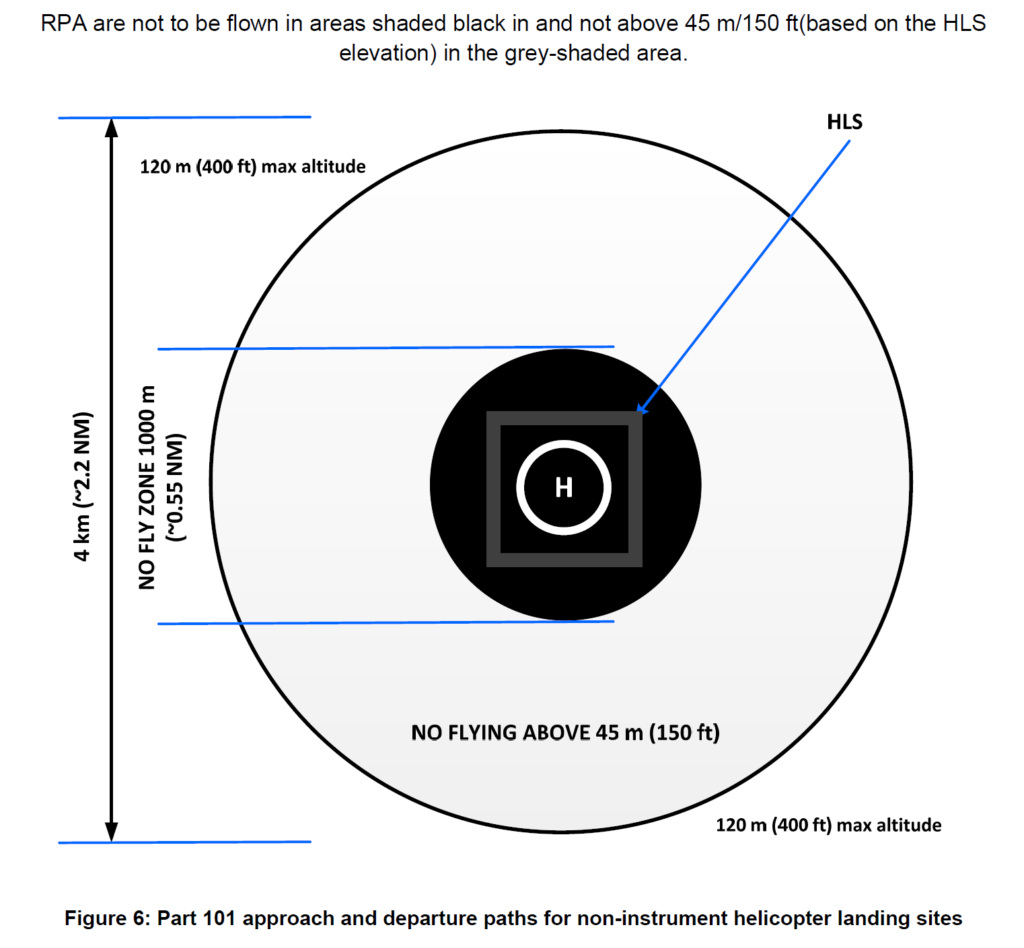 Unless approved by the authority controlling the area, you cannot fly an unmanned aircraft in a “restricted” or “prohibited” area. These are areas of airspace in which a potential hazard to aircraft exists, therefore the operational of civilian aircraft (including drones) is restricted. It is very difficult for recreational drone operators to identify these areas, but apps such as “Can I Fly There?” and “RWY Check” may help. However, restricted areas are generally around military bases/ranges and high-risk facilities such as Lucas Heights in south-west Sydney. Unfortunately, Sydney Harbour is also a restricted area – you cannot fly over the harbour unless approved by CASA. This is due to the large number of floatplanes and helicopters that operate in the area. Sorry to ruin your travel plans.

You cannot fly your drone more than 400 feet above ground level unless approved by CASA. Imagine a piece of string that is 400 feet long and tied to your RPA. The bottom of the string must be touching the ground at all times.

7. You must keep your drone within “visual line of sight”

The legislation explains “an unmanned aircraft is being operated within the visual line of sight of the person operating the aircraft if the person can continually see, orient and navigate the aircraft to meet the person’s separation and collision avoidance responsibilities, with or without corrective lenses, but without the use of binoculars, a telescope or other similar device”. Notice nothing is mentioned about looking at the screen of a tablet, or using first person view (FPV) goggles? You must see, orient and navigate with your own eyeballs. The limitations of the human eye make it impossible to do if you fly your drone more than one kilometre from you. We’ll discuss the use of FPV soon.

8. You cannot operate your drone at night (the time between civil dusk and dawn), and you cannot fly into cloud (this includes fog!).

9. No flying near emergency services operations

Previously, the legislation only prevented “Excluded” RPA (i.e. sub-2kg operators) from operating near emergency operations (but all other RPA had no such legislative restrictions). Now all unmanned aircraft are required to stay clear (that’s everyone – model aircraft, Excluded RPA, and ReOC holders).

10. You cannot fly within 30 metres of another person

A person controlling an RPA must ensure that the aircraft is not operated less than 30m from a person unless the person has duties essential to the control of navigation of the aircraft. This includes your own family – the legislation doesn’t permit you to get their consent as a means to fly closer.

A new explanation from CASA is “the distance of 30m is measured in every direction from the point on the ground directly below the aircraft”.

Imagine a person standing in the middle of a cylinder that extends in a 30m radius from them, and stretches up to the sky – you cannot fly within this cylinder (no more flying overhead people at any height).

This does not apply if an authorisation or exemption is granted by the CASA via the CASRs (such as an authorisation in your operations manual allowing you to fly within 30m of someone). Another person just can’t give you permission to fly in close proximity – CASA must provide the authorisation.

There is no weight mentioned in this direction from CASA, meaning even micro RPA (weighing 100 grams or less) must be kept at least 30m from people. However, you are not required to follow this rule if operating a recreational drone (model aircraft) indoors. Therefore, you can fly within 30 metres of someone if inside (just don’t create a hazard – be safe!).

The following video shows why flying overhead people is a bad idea!

11. No flying over “populous areas”

When considering drone operations over populated areas, the safety of people and property below is paramount. The term ‘populous area’ is regularly used in the legislation, with the definition being:

“An area is a populous area in relation to the operation of an unmanned aircraft or rocket if the area has a sufficient density of population for some aspect of the operation, or some event that might happen during the operation (in particular, a fault in, or failure of, the aircraft) to pose an unreasonable risk to the life, safety or property of somebody who is in the area but is not connected with the operation.”

It is important to note that it refers to posing an unreasonable risk to “life, safety or property of somebody”. Therefore, not only does the term populous area consider the possibility of a person becoming injured (or killed), it also considers the likelihood of damaging property, such as houses, cars and infrastructure.

Some might view this meaning as ambiguous, and different people may have different views on the meaning of phrases like “sufficient density of population” and “pose an unreasonable risk”. However, CASA has attempted to provide clarification of drone laws by providing further examples in their advisory circulars:

“If a rotorcraft-type RPA (drone) is flying at a relatively low height (i.e. 100 feet) directly above a single person not associated with the flight, it may be considered to be operating in a populous area due to the fact that a complete loss of power may cause injury to the person below. Similarly, an RPA (drone) operating over a large public gathering at a high level (i.e. 400 feet) would pose an unreasonable risk to the safety of the people below because, in the event of a systems failure, it may not be able to clear the area. This interpretation would apply equally to higher flight over built-up areas where there is a greater risk to property.”

While these clarification statements from CASA are guidance only (and are not law), it is strongly recommended you follow CASA’s advice to ensure you are complying with the drone laws. Most drones will not be able to glide clear of the area in the event of a failure. This can make it near impossible to operate in many built-up areas and still adhere to the populous area rule. And remember, one person can still make it a populous area, as seen in the following video… 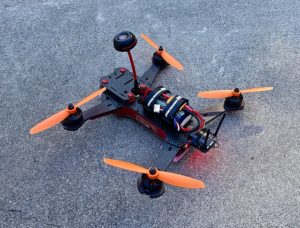 The emergence of quadcopters, first person view (FPV) headsets and improved live video technology has resulted in exciting new sports flying, such as drone racing. By wearing the FPV headset, the remote pilot is placed within their quadcopter’s virtual cockpit, giving them the exact view that would be seen from their aircraft. The pilot no longer uses direct visual line of sight as their primary means of controlling the drone, rather utilising a live video downlink from a camera fixed to the aircraft.
The limitation of this view is a loss of situational awareness as the pilot is no longer able to see their surrounding environment, and therefore cannot see possible safety threats, such as approaching members of the public. The ability to recover from an emergency situation, either due to pilot error or a systems failure, is also greatly diminished as the pilot may not be able to re-acquire the aircraft visually with sufficient speed to prevent a crash. Overall, wearing FPV headsets also does not allow the pilot to directly view their drone, which the visual line of sight rules discussed above.
So does FPV flying now become an illegal flying activity? Not quite – in some circumstances FPV flying is permitted, provided several conditions are met. At the time of this blog, CASA has provided exemption EX138/16 to allow the use of FPV technology. However, a number of strict conditions apply:

Although CASA oversees the legislation for the operation of unmanned aircraft, local drone laws are increasingly being introduced. A simple way of thinking about it is CASA governs the airspace, but other authorities control the drone once it’s on the ground. For example, most state governments have banned drones from taking off or landing within national parks and reserves. Many local councils have also made the operation of drones on council property a prohibited activity. A Google search, contacting government authorities or a discussion with locals might help you understand any local drone laws that will affect you flying. It pays to do a bit of research. 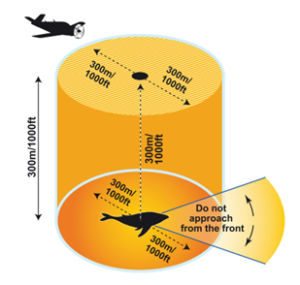 In addition, there are rules that stop you operating drones near whales and dolphins. The Australian National Guidelines for Whale and Dolphin Watching explains all aircraft, including drones, may cause a disruption to marine life due to their speed, noise, shadow or downdraft. The guidelines state “drones” are considered to be “aircraft” (not helicopters). This means people operating drones near whales and dolphins must abide by the following requirements. The drone must not:

Finally, the guidelines explain a person who wishes to operate a drone in close proximity to a whale or dolphin will need to apply for a permit from the Department of the Environment and Energy (in Commonwealth waters) or the relevant state or territory government (in coastal waters).